The lovely guys over at BT will be hosting a very special bingo night to celebrate their fantastic range of SIM-only plans! And you could be in with a chance of winning one of three Samsung Galaxy S6 smartphones!

To get involved, all a Jane will need is the last six digits of her mobile phone number (as they will be your unique bingo numbers) and access to Twitter. The game itself is very simple, the first person to cross off the last six digits of their mobile number, wins! So, every minute until there is a winner, BT will reveal a new number between 0-9 from the @BT_UK twitter account. These numbers will be randomly selected and shared via a tweet, e.g. Eyes down! First off we have No.7, lucky for some… #BTMobileBingo.

As soon as your six digits are called out, @mention @BT_UK with ‘Full House! I just won #BTMobileBingo’ and you could win a Samsung Galaxy S6 Smartphone!

To be in with a chance of claiming the fantastic Samsung Galaxy S6 Smartphone prize, follow @BT_UK and play #BTMobileBingo, it will kick off at 6:30pm, 7.30pm and 8pm on 29th September 2015.

If you are the lucky prize winner or are on the lookout for an incredibly cheap phone tariff, BT Mobile have three 4G Sim-only 12 month plans with data, minutes & texts for as little as £5 a month!

Imagine how much money you could save on your phone bill and guess what! BT Mobile has the UK’s biggest 4G Network, alongside the most extensive wi-fi coverage via more than 5 million UK BT Wi-fi hotspots, so if you want fast and reliable internet, BT is the best option for you!

As for you sporty Janes who like keeping up to date with the footie results, BT Mobile customers can also receive the BT Sport app, with BT Sport Lite content including 38 Barclays Premier League matches.

For more information on the incredible SIM only deals, head over to BT’s website: BT/Mobile, and don’t forget to get involved with #BTMobileBingo, good luck! 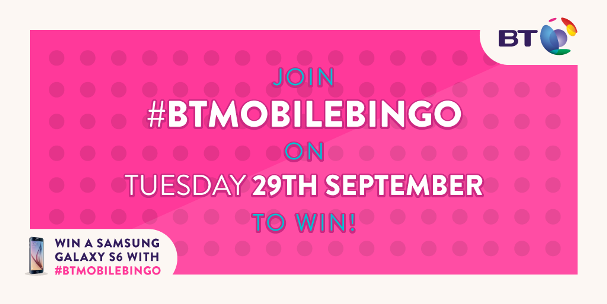