There are SO many things to get excited about this month, from planning your Halloween costume to the return of the Netflix smash hit series Stranger Things. But for those of you who binged watched the first season the day it came out last July, you might need a little recap of what happened before you can return to Hawkins for the second instalment.

The first season follows the disappearance of a young boy named Will Byers and the chain of events it launches in the small town of Hawkins, Indiana. Here’s our mini episode breakdown of the season, of course there’s spoilers galore, so if you’d rather not know, click away now.

Chapter 1: The Vanishing of Will Byers

It’s 1983 and we are introduced to the U.S. Department of Energy laboratory in the town of Hawkins, where a scientist is taken out by an unseen creature. After a thrilling game of Dungeons and Dragons with his best friends, 12-year-old Will Byers is cycling home when he encounters the creature and vanishes in thin air.

The following day, a young girl in a hospital gown with a shaved head appears and steals food from a local diner. The owner, Benny, feeds her and then calls social services. From a tattoo on her arm, he learns that her name is Eleven and she’s the coolest 12 year old she’s ever encountered. Not lonf after, a lady posing as a social worker arrives and kills him. Armed men then search the diner for Eleven, but she gets away just in time, thank god. Will’s mother Joyce (played by Winona Ryder) gets a bizarre distorted phone call that she reckons is Will, but her phone cuts out. Will’s friends and all-round fabulous child actors Lucas, Mike, and Dustin search for him in the woods and discover Eleven.

Chapter 2: The Weirdo on Maple Street

The trio of boys take Eleven to Mike’s house where she sleeps in the basement. She tells them that “bad people” are looking for her and refuses to meet Mike’s parents, fair enough. On an ET-like tour of Mike’s house, Eleven recognises and points out Will in a photo. Meanwhile, Will’s brother Jonathan is investigating the woods where his lil bro went missing. While there, he hears screams, and runs to find out that it’s just Mike’s older sister Nancy with her friend Barb at a pool party at Nancy’s boyfriend Steve’s house. He secretly photographs them gettin’ jiggy. Barb, left alone by the poolside, vanishes moments later. Over at Joyce’s house, she receives another call from Will, hears music from his room, and sees something coming through the wall. Scary stuff.

Bad news for Barb at the beginning of this ep, as she is dragged away screaming by something unseen. Chief Hopper is on the case though and takes a look at Hawkin’s lab’s security camera footage, but realises it’s fake. He then researches into the Lab, and finds out that a woman named Terry Ives claimed her daughter was taken by the lab’s director, the creepy Dr Martin Brenner, a few years back. At the same time Eleven has a flashback in which Brenner, whom she calls “Papa”, has her put in solitary confinement for refusing to telekinetically harm a cat.

In other news, Nancy is now worrying about Barb, who is missing. At least someone is worrying, #JusticeForBarb. Steve and his friends discover Jonathan’s pervy photographs, they then destroy them and his camera. But Nancy recovers a photo of Barb by the poolside. Nancy searches for her and finds Barb’s car, whilst simultaneously seeing the creature in the woods.

Back at Chez Byers, Joyce has strung up Christmas lights and created an alphabet code to talk to Will. He tells her that he is alive but unsafe and further tells Joyce to run as a creature begins to climb through her wall. The episode ends with Will’s apparent body being discovered in the water at a quarry, but we all know it’s bullsh*t. 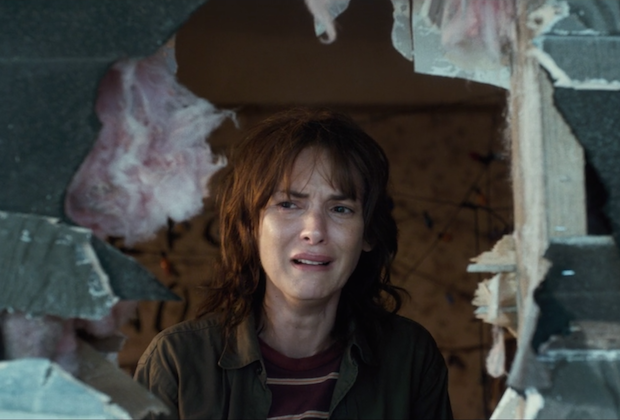 Eleven proves to the boys that Will is still alive by making contact through Mike’s walkie-talkie. Good work El. Joyce refuses to believe the boy in the morgue is Will and also hears him in her living room wall. Tearing away the wallpaper, she sees him behind a membrane. KNEW IT. At school, an undercover Eleven uses Mr. Clarke’s ham radio to channel Will talking to his mother. Joyce destroys the wall with an axe but reveals only her front porch. GOD DAMN IT.

Nancy discovers a figure behind Barb in Jonathan’s photo, it’s fuzzy but it’s definitely not a human or animal. Jonathan realises that the figure matches his mother’s description of the creature. Nancy finally tells the police that Barb is missing, #JusticeForBarb. Hopper the badass confronts the state trooper who found Will’s body and beats him until he admits he was ordered to lie. He then goes to the morgue and finds that Will’s supposed body is a dummy, fabulous scene, 10/10. But Before telling Joyce (bad idea) he breaks into Hawkins laboratory. 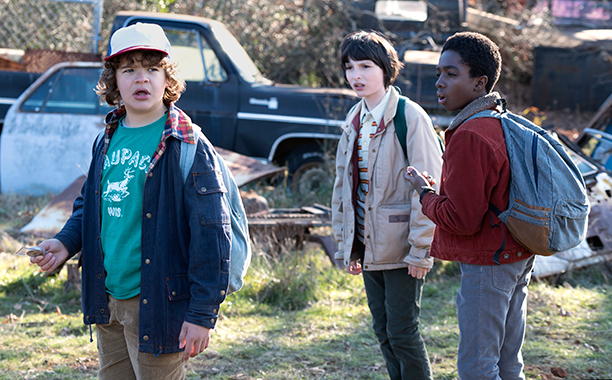 Chapter 5: The Flea and the Acrobat

The boys finally realise that Will is trapped in an alternative dimension which Eleven calls the Upside Down. Hopper discovers a portal in the basement of the lab, but is knocked out by the lab’s guards and wakes at home. Did they do something to him? He searches his house and finds a hidden microphone.

After Will’s funeral, (come on we know he’s not dead) the boys ask Mr. Clarke about other dimensions. Believing that a tear in spacetime would disrupt Earth’s electromagnetic field, #Science, the boys follow their compasses. Eleven has a vision of being placed in a sensory-deprivation tank to telepathically eavesdrop on a man speaking Russian; while listening, she stumbles across the creature. Scared of encountering the creature again, she messes with the compasses. Lucas notices and gets angry. Mike defends her, he and Lucas fight, and Eleven uses her mind to fling Lucas off Mike. It’s awesome. While Dustin and Mike tend to the unconscious Lucas, Eleven disappears. 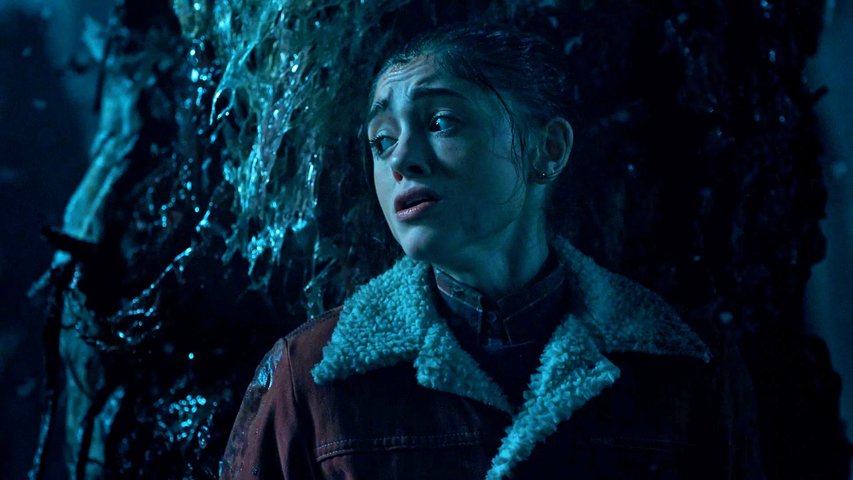 When she can’t get out of the portal by herself, Jonathan pulls Nancy through and saves her from the monster. Good job JB. In her bedroom, she is afraid to be alone and asks Jonathan to stay. The next day, Nancy and Jonathan resolve to kill the monster and buy supplies from a store.

Joyce and Hopper track down Terry Ives, who is mute and looked after by her sister Becky. Becky explains that Terry underwent Project MKUltra testing while unknowingly pregnant; she believed her daughter Jane was kidnapped by Brenner at birth. The bastard. Joyce and Hopper conclude Eleven is likely Jane.

In the woods, Eleven recalls being asked to contact the monster and how her contact opened the portal to the Upside Down in the laboratory basement. Oh shit. While searching for Eleven, Mike and Dustin bump into bullies Troy and James. Troy (the one who pissed himself a few episodes ago) holds Dustin at knifepoint and demands that Mike make a suicidal jump into the quarry where Will’s body was discovered. Mike jumps but is levitated to safety by Eleven, who scares the bullies away. YAS QUEEN. Up in a tree, Lucas sees agents leaving the laboratory and realises they are heading to Mike’s house. 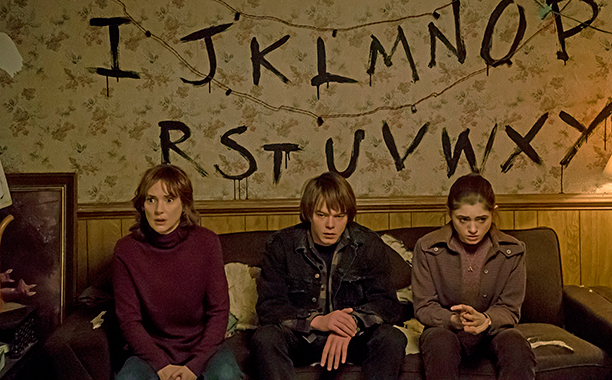 Lucas warns Mike via walkie-talkie that government agents are en route. Mike, Dustin, and Eleven flee the house and manage to escape after Eleven telekinetically flips a van that blocks their path.

Jonathan and Nancy FINALLY reveal their knowledge of the monster to Joyce and Hopper. The group work together to contact Mike and they all rendezvous. They ask Eleven to search for Will and Barb, but she can’t. To amplify Eleven’s powers, they break into the middle school and build a sensory-deprivation tank. Eleven finds Barb’s corpse with a slug-like creature crawling out of her mouth, #JusticeForBarb. With Joyce’s help, she finds Will alive, hiding in the Upside Down “Castle Byers”, his backyard fort.

Hopper and Joyce break into Hawkins Laboratory but are stopped by security guards. Nancy and Jonathan resolve to kill the monster and steal their hunting stuff back from the police station. In the Upside Down, the monster breaks into the fort where Will is hiding. DAAAAMN.

Chapter 8: The Upside Down

A lot happens in the finale so listen UP! Hopper gives up Eleven’s location to Brenner in exchange for access to the portal. Don’t be mad at Hopper, he had no choice. He and Joyce then enter the Upside Down.

Nancy and Jonathan booby-trap the Byers’ home, then cut their hands to attract the monster with their blood. With a little help from Steve the monster gets stuck in a trap, they set it alight, but then it vanishes.

Meanwhile, Eleven and the boys are hiding in the middle school. Mike asks Eleven to a school dance called the Snow Ball and kisses her, v cute. But Bastard Brenner and his agents cockblock when they arrive to get Eleven back; Eleven kills most of them, but collapses from exhaustion. As Brenner cradles her, the monster appears. The boys carry Eleven to a classroom and hide as the monster devours Brenner and the agents.

Hopper and Joyce find the monster’s nest in the Upside-Down town library. Will is there, unconscious with a tendril down his throat. At the middle school, the monster finds the children, but is taken out by Eleven, who then vanishes. Hopper and Joyce perform CPR on Will, revive him and bring him back. He is then hospitalised and reunited with everyone. Hopper is reluctantly picked up by a black car, what has he done!?

One month later, Nancy has gotten back together with Steve, so dumb, we are team Nanathan. Hopper leaves eggos in a box in the woods. Will coughs up a slug-like creature and has a vision of the world as the Upside Down, but he doesn’t tell Joyce or Jonathan.

WOAH, so there you have it. You’re all up to date now.