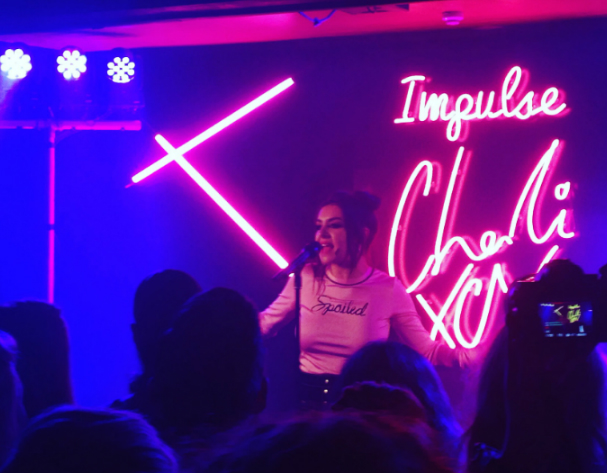 We popped along to London’s Cuckoo Club to join the launch, welcomed in by the iconic Impulse body spray fragrance of Vanilla Kisses, which took us straight to flashbacks of our teenage years!

Arriving onto a set emblazoned with pink neon, Charli wowed the audience with a short blast of her hits, including Boom Clap and Break The Rules, getting the crowd in the party mood. We have to admit we were coveting her nineties-inspired Asos suede skirt!

We were keen to do a bit of celeb-spotting and certainly weren’t disappointed! Made in Chelsea’s Lucy Watson was seen sipping cocktails at the bar, and fellow MIC star Stephanie Pratt politely sidled past us, looking gorge in a sparkly jumpsuit. We even spotted TV legend Anthea Turner.
Our eyes were also caught by an explosion of colour, sparkles and glitter that turned out to be The Confetti Crowd. This group of five independent female creatives lit up the gig floor in their incredible outfits, including pom-pom earrings and a sequinned cat-face crop top. We were loving their style.

Charli’s range for Impulse features two new limited edition cans which the singer has clearly stamped with her independent style. Two classic scents have been given the XCX makeover. Rock Love is a hot pink bottle wrapped with black nails, and the distinctive Vanilla Kisses fragrance has been given a pouty kiss. At only £1.99 a bottle they’re a perfect pick-me-up gift for the younger female family members and friends in your life. Or if you just fancy fully embracing the 90s revival trend with lashings of vanilla, we won’t judge!

Which was (or still is!) your favourite Impulse fragrance? Share with us @tweetjanes