Not a week goes by when we aren’t thinking about one of the Hemsworth brothers. If it’s not Chris, it’s Liam and on frequent occasions it’ll be both. But as we have already blogged our love for the utterly Thor-some Chris Hemsworth, it’s Liam’s turn! 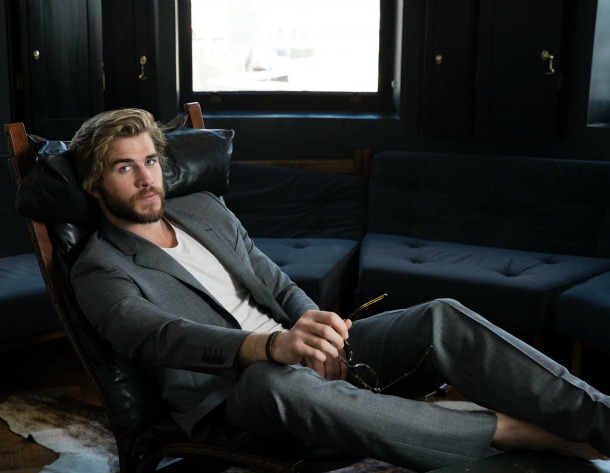 Best known for playing Gale Hawthorne in The Hunger Games Saga, Liam has walked his fair share of red carpets over the years. So we thought it would be a fitting tribute to the hunky Australian star to share some of our favourite pictures of him from premieres, award ceremonies and prestigious events.

Liam poses for photographer Mark Segal in one of his first photoshoots, for Interview Magazine. As part of the interview he reflects on the main reason why he got into acting in the first place and credits sibling rivalry. He said: “I saw my brother doing it and I thought I could do it better.” Read the whole interview here.

Liam donned a Dolce & Gabbana suit for the occasion and we’re sure had all of the Spanish Hunger Games fans swooning as he strolled down the red carpet.

Posing with his brothers, Chris (far right) and Luke (far left) we cannot even begin to imagine what the trio got up to at the party. One thing we do know for sure though: they won the genetic lottery.

Liam Hemsworth with a beard? Please and thank you.

Technically not photos of Liam in a suit, but we’re sure there will be no complaints! Liam was the cover star for Men’s Fitness Magazine’s December 2014 edition. Look at those muscles!

The final Hunger Games premiere, cue the tears! Just look at the love in Jennifer Lawrence’s AND Josh Hutcherson’s eyes for Liam, we’ll miss seeing these three together on the red carpet.

He’s kept the beard but trimmed his hair, we approve of this look. Hopefully he’ll carry it on into 2016, a Jane can dream.

That’s it from us but don’t worry, it won’t be too long until you see Liam suited and booted in 2016 as his latest film Independence Day: Resurgence will be hitting cinemas this summer. Watch him star in the trailer below:

Are you a Liam Hemsworth fan? Let us know! @tweetjanes